Gbedema is in the Upper East Region, 20 km south of Sandema, on the Fumbisi Road.  The school has 225 pupils and 3 classrooms, of which one has electricity from a solar panel.  It also has a programme for the visually impaired.  Elizabeth Howe, a Peace Corps Volunteer at the school 2013-2015 helped the school apply to GSA for a grant to set up computer facilities at the school.  The school wishes to provide a new computer room, and the community, led by the Chief, is fully supportive of the project.  Elizabeth sent two pictures, one of an old wall of the building to be restored, and one of future computer users. 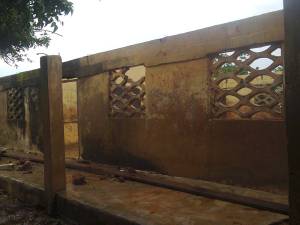 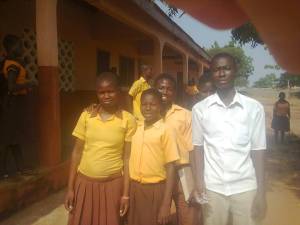 UPDATE JULY 2015:  Elizabeth Howe, a Peace Corps volunteer, requested money for a digital projector for the school’s computer room.  The school has 225 pupils and 3 classrooms, one of which has electricity from a solar panel.  GSA sent £500 for the projector.  Elizabeth emailed recently to say the computer room doors had been made too big for the frames, the 2 signatories found it hard to get to the bank together, and frequent power cuts were slowing everything down.  But they’ll get there in the end!